In a major project, to a value of £320,000, half funded by a grant from the Department of Health, we developed a repair system for the keyhole surgical repair of abdominal aortic aneurysms.

This is an embroidered stent, as used for the repair of abdominal aortic aneurysms. The picture shows how much it can be twisted, without the lumen becoming closed. 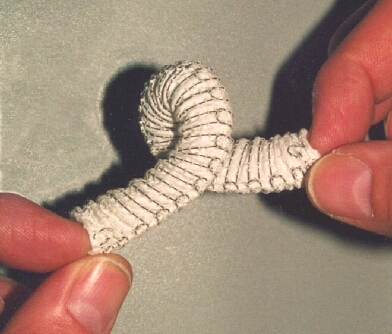 Embroidery Technology is not exactly new. Hand embroidery has been used for decorating textiles for thousands of years; even automatic embroidery machinery has been in use for over a 150 years. The only thing that is really new is its application to surgical implants, which has been developed within the last few years.

Textile surgical implants have, until now, been constrained by the use of the traditional methods of knitting, weaving or braiding to make fibre assemblies. However, weaving usually limits the designer to placing fibres interlaced at right angles to one another, knitting forms the fabrics in loops which are generally dimensionally unstable, and braiding confines the designer to (usually) narrow structures made in a process similar to plaiting hair.

Embroidery is the formation of stitches on a base cloth, it being possible to place the stitches in any position. The fibres between stitches can thus be in any direction desired. The base cloth can be dissolved away after the stitching process has been carried out, and, assuming appropriate design features have been incorporated, the structure holds securely together as a stable entity. When making technical textiles, one is usually interested in structure rather than appearance and since fibres can be placed in any orientation in the plane of the base cloth, endless possibilities arise, especially mimicking natural fibrous arrays such as in natural ligaments. For example, the fibres in a particular ligament may fan out from a bundle 3 mm wide to an array 20 mm across, a design feature which is easy to reproduce with textile fibres using embroidery technology. Another example could be a fracture-fixation device which has load-bearing threads arranged optimally to fit the part of the body where it is to be used and with open mesh parts which allows tissue ingrowth and consequent incorporation into the body.

The colour change facility of the machine can be used to alter the components in various parts of the implant as it is being manufactured – and allows the automated incorporation of attachment parts and other features very easily.

Modern embroidery uses sophisticated software dedicated to the quick and easy production of designs for the decoration of garments. Modifications to the use of this software allow fibre arrays to be designed for use as surgical implants with similar facility. This leads to the possibility of customised implants for individual patients. By way of example, we have taken a rough sketch of a component from a surgeon and converted it into an embroidery design, e-mailed it to Pearsalls Limited in Taunton, Somerset, and moved from concept to a preliminary concept manufactured product in less than three hours . The potential, even for specialist trauma surgery, is very exciting.

We have proved the general concept of using embroidery for surgical implants in a MedLINK project, which developed a device for the endovascular repair of abdominal aortic aneurysms. Although up to 1900 different size combinations are required to treat all the patients likely to be seen by a surgeon, special software now allows us to take the dimensions of an aneurysm provided by the surgeon from CT Scans and produce a customised embroidery design within seconds, and commence manufacturing within minutes. The device has significantly improved characteristics when compared with most other available devices.

Other work continues to be carried out to develop a range of orthopaedic implants for a diverse range of end users. All the devices in advanced stage of development at the moment are mainly constructed of polyester suture thread. One of the reasons for this is that the use of threads produced specifically for surgical applications raises no questions for surgeons about suitability for well designed implants: their behaviour and properties in the body are well documented. However, we are rapidly developing new advanced materials and structures and the development of active implants. The future is very encouraging and it is hoped that the technology will help in producing the framework for organs using the patients own cultured tissue which will replace diseased and damaged parts without the problems currently associated with transplant surgery.

The device developed, in a collaboration between Ellis Developments, Pearsalls Ltd, of Taunton, Somerset, Prof. Brian Hopkinson of The University of Nottingham and Lombard Medical has resulted in a highly successful endovascular graft marketed by Lombard.